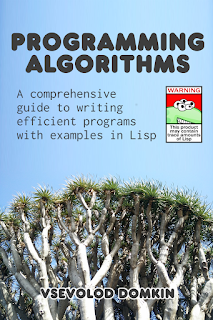 Drago — a nice example of a real-world binary tree

This was the first post about my book on algorithms and Lisp. Writing it, actually, started several years ago, but as I experience a constant shortage of quality time to devote to such side activities, short periods of writing alternated with long pauses. Now, I'm, finally, at the stage when I can start publishing it. But I intend to do that, first, gradually in this blog and then put the final version — hopefully, improved and polished thanks to the comments of the first readers — on Leanpub. The book will be freely available with a CC BY-NC-ND license.

Here is a snippet from the introduction chapter. A more elaborate description of the book may be found on its website.

In our industry, currently, there seems to prevail a certain misunderstanding of the importance of algorithms for the working programmer. There's often a disconnect between the algorithmic questions posed at the job interviews and the everyday essence of the same job. That's why opinions are voiced that you, actually, don't have to know CS to be successful in the software developer's job. That's true, you don't, but you'd better do if you want to be in the notorious top 10% programmers. For several reasons. One is that, actually, you can find room for algorithms almost at every corner of your work — provided you are aware of their existence. To put it simply, the fact that you don't know a more efficient or elegant solution to a particular programming problem doesn't make your code less crappy. The current trend in software development is that, although the hardware becomes more performant, the software becomes slower faster. There are two reasons for that, in my humble opinion:

In the book, I'll address, primarily, the second issue but will also try to touch on the first whenever possible.

Besides, learning the art of solving difficult algorithmic problems trains the brain and makes it more apt to solving various other problems, in the course of your day-to-day work.

Finally, you will be speaking the same lingua franca as other advanced programmers — the tongue that transcends the mundane differences of particular programming languages. And you'll gain a more detached view of those differences, freeing your mind from the dictate of a particular set of choices exhibiting in any one of them.

One of the reasons for this gap of understanding of the value of algorithms, probably, originates from how they are usually presented in the computer science curriculum. First, it is often done in a rather theoretical or "mathematical" way with rigorous proofs and lack of connection to the real world™. Second, the audience is usually freshmen or sophomores who don't have a lot of practical programming experience and thus can't appreciate and relate how this knowledge may be applied to their own programming challenges (because they didn't have those yet) — rather, most of them are still at the level of struggling to learn well their first programming language and, in their understanding of computing, are very much tied to its choices and idiosyncrasies.

In this book, the emphasis is made on the demonstration of the use of the described data structures and algorithms in various areas of computer programming. Moreover, I anticipate that the self-selected audience will comprise programmers with some experience in the field. This makes a significant difference in the set of topics that are relevant and how they can be conveyed. Another thing that helps a lot is when the programmer has a good command of more than one programming language, especially, if the languages are from different paradigms: static and dynamic, object-oriented and functional. These factors allow bridging the gap between "theoretical" algorithms and practical coding, making the topic accessible, interesting, and inspiring.

This is one answer to a possible question: why write another book on algorithms? Indeed, there are several good textbooks and online courses on the topic, of which I'd recommend the most Steven Skienna's The Algorithm Design Manual. Yet, as I said, this book is not at all academic in presentation of the material, which is a norm for other textbooks. Except for simple arithmetic, it contains almost no "math" or proofs. And, although proper attention is devoted to algorithm complexity, it doesn't deal with theories of complexity or computation and similar scientific topics. Besides, all the algorithms and data structures come with some example practical use cases. Last, but not least, there's no book on algorithms in Lisp, and, in my opinion, it's a great topic to introduce the language. The next chapter will provide a crash course to grasp the basic ideas, and then we'll discuss various Lisp programming approaches alongside the algorithms they will be used to implement.

This is an introductory book, not a bible of algorithms. It will draw a comprehensive picture and cover all topics necessary for further advancement of your algorithms knowledge. However, it won't go too deep into the advanced topics, such as persistent or probabilistic data structures, advanced tree, graph, and optimization algorithms, as well as algorithms for particular fields, such as Machine Learning, Cryptography or Computational Geometry. All of those fields require (and usually have) separate books of their own.